There is a traveling carnival coming to LEGO City. This means rides, amusements and concessions for the citizens of the city to enjoy. The big draw is the LEGO Creator Expert 10244 Fairground Mixer Set . The two transport trucks are slowing making their way into position with their precious cargo on board and the carny minifigures are ready to set up for another season of fun and excitement.

The main feature in this 1700 piece build is the fairground mixer ride. 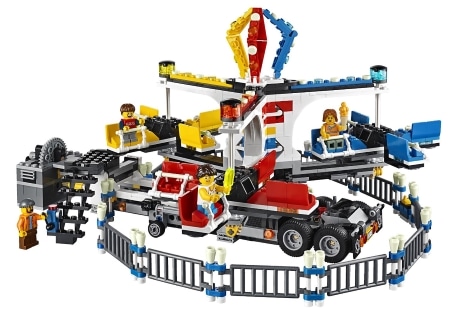 This build uses a range of multicolored parts and folding structures. This means that this portable fairground ride can be transported onto the site and turned into an exciting thrill ride for all the mini figures that come to the fairground. When it is unfolded, it measures in at an impressive 30cm high and 45cm long. Parents and children alike are impressed with the realistic shape and the thought that has gone into this element. It adds to the challenge of the build and perhaps explains why this is seen as a 16 plus set. There are younger kids building it and claiming that it is a challenge because of the fiddly parts, but it was still a challenge they enjoyed.

With 12 mini-figures n this set, the fair definitely isn’t short of people to play the games and ride the ride. Of the citizens, there are two men, two women, two boys and two girls. One of the men seems more interested in trying his luck with the high striker and winning the teddy bear for his girlfriend. Another rode so many times that he is feeling a little worse for wear. The other characters are the carnival staff. There is the operator for the ride, a woman taking tickets, a lady bravely sitting in the dunk tank and a juggler juggling pins while walking on stilts. 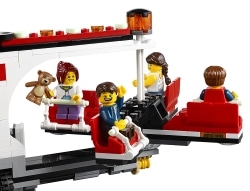 The beauty of this 16+ LEGO ride is that it really works.

There are two ways to get the cars to move for an authentic experience. First players can use the simple crank operation to spin the cars. This gives the operator the chance to adjust the length of the ride and the speed. Bring the ride to a gentle halt as the queues start to build, wait for all the riders to safely seat themselves and build up the excitement. Scream if you want to go faster! For players that want to be able to play with other elements, while also having a moving, spinning fairground ride, there is also the opportunity to upgrade the model with LEGO Power Functions pieces.

The LEGO Creator Expert 10244 Fairground Mixer Set is then completed with the extra elements and accessories. These pieces stop this from being a simple fairground ride set and turn it into a traveling show. The ride comes with a ticket booth and a safety fence. There are two sideshows for the minifigures to try their hand out, the high striker and dunk tank. There are also glow in the dark elements to the pieces to conjure up images of the neon lights of the fair. When the fun of the fair is over for the night and everyone has either defeated, or been defeated by the sideshows, there is just time for a quick snack from the ice cream stall before heading home.