​The Statue of Liberty has been an important part of New York ever since it was gifted to the nation and began greeting immigrants. It is still a major tourist attraction and imposing part of the skyline around the harbour. Architecture Statue of Liberty LEGO Set 21042 isn’t the first time that LEGO has worked with this design. But, this might be the best version yet. 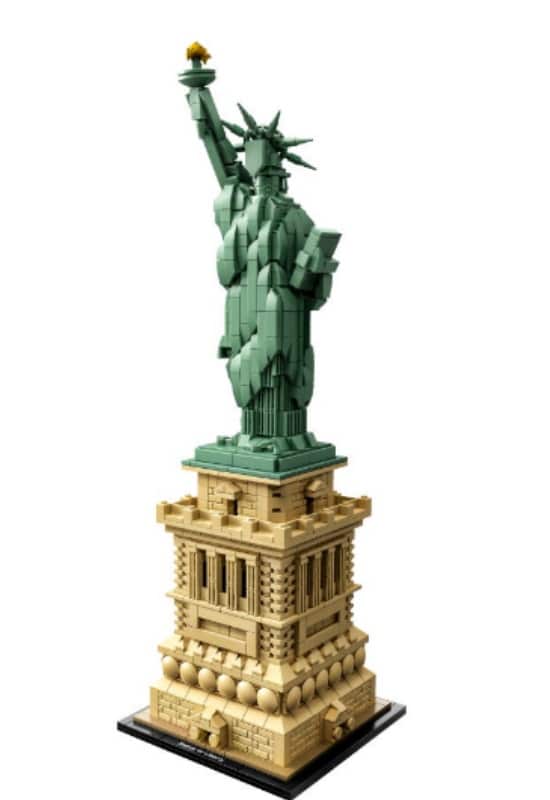 ​This large structure really is a build of two halves.

There are two main elements to this build. It is up to you if you want to start with the foundations and work your way up to the crown, or if you want to do the statue and base separately. The statue is surprisingly realistic for something made from plastic LEGO bricks. You half expect to see some weathering on the bronze or a few pigeons hanging around. The colour of the bricks plays a big part in that, as does the careful sculpting of Lady Liberty’s body and robes. In one hand is her tablet in the other her torch, which is finished in gold for that ideal finishing touch. You also get to carefully fix her crown to her head for that iconic silhouette.

​The bronze-green statue sits on a plinth that is just as grand and actually requires a lot of time and effort. The sand-stone brickwork is intricate with ornate details all the way around. You can build all the little balconies and features that replicate the real thing. Once complete, this cool LEGO set sits on a smart nameplate so that it can stay on permanent display.\

This difficult set for adults is a brilliant way to bring Lady Liberty to life.

The detail that goes into this build means that you can enjoy an advanced set here. There are more than 1000 pieces included creating those flowing robes and attractive architecture. There is also a 16+ rating, but this may have more to do with the fact that there are no elements for creative play for the kids. Instead, this is a grown-up build for architecture and history lovers. The bonus booklet of information enhances that and make this a great gift idea for fans. It is also a nice touch that the book comes in English and French to honour the history of the monument. Architecture Statue of Liberty LEGO Set 21042 isn’t an easy build, but it is brilliant labour of love for the right collector.