There will always be some debate over which era of Batman had the best designs. Older fans often get nostalgic for the Keaton-era and the 1989 Batman movie. There is a nice blend of dark, gothic shapes that suit the Caped Crusader and a comic-book feel. The original Batwing is a great example, and the 1989 Batwing 76161 Lego Set captures that in great detail.

The appeal of this model mostly lies in the design and shape of the vehicle.

This is one of those models that really took advantage of the Batman logo and wing shape to create a stylish aircraft. It might not be as practical as others, but it looks cool. The main body of the plane and cockpit also mimics Batman’s cowl with the little tufts/ears on the side. 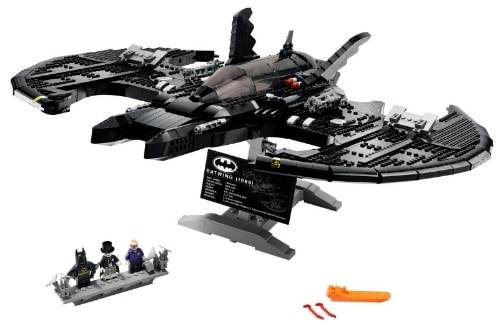 There are 2363 pieces in this large LEGO set, which means lots of little black bricks to place in just the right order to get those symmetrical wings and stylish cockpit right. Build it up layer by layer over time in what LEGO calls a challenging but stress-relieving build. The exterior is more complex than imagined, with some nice metallic touch here and there and poseable flaps. There is also some attention to detail in the interior cockpit, making this a difficult but functional build.

While there is undoubtedly a grown-up feel to this model, collectors also get to have a little fun with the additional mini-figures.

Batman is there, of course, with his flowing cape and costume straight out of the movie. Players can lift up the canopy on the cockpit and place him inside to act out story-lines if they want as well. Also included are an exclusive version of the Joker, unlike typical designs, and a Boombox goon. These choices show how geared towards older fans this set really is. 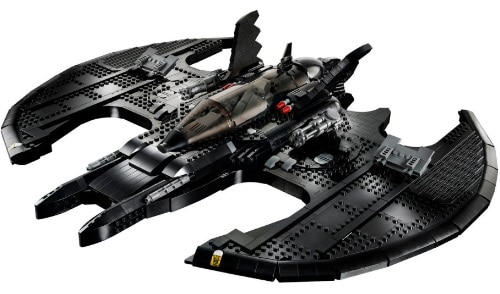 As this is an 18+ collector's piece, you can expect a high level of detail in the build and a nice display to finish it off.

The stand raises the Batwing up on a desk so that it appears to be hovering. This shows off the aerodynamic shape well. There is also a little card with details on the vehicle and its place in the Batman universe. Alternatively, you can use the wall-mount to turn this into a stunning piece of LEGO wall art. Overall, the 1989 Batwing 76161 Lego Set is a brilliant way to pay homage to this original Batman film 30 years on.